See Ron Fierstein on PBS: Barry Kibrick's Between the Lines

A Division of ABA Publishing Inc.

Distributed to the trade by: 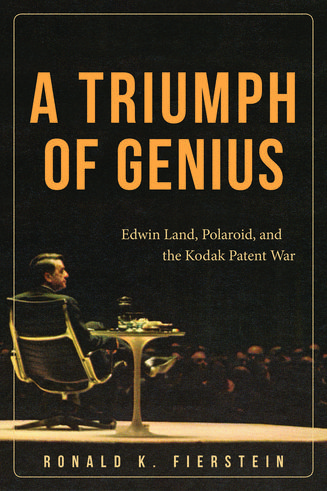 About the book:
Apple founder Steve Jobs once hailed Edwin Land, the founder of Polaroid and the father of instant photography, as “a national treasure,” and modeled much of his own career after his. Both men stand out as unique and towering figures in the history of technology. Neither had a college degree, but both built highly successful, innovative organizations. Each was a perfectionist and micro-manager almost fanatically attentive to detail, in addition to being consummate showmen and instinctive marketers. In many ways, Edwin Land was the original Steve Jobs.

Land is perhaps the most important, yet least known, inventor and technology entrepreneur in American history. A Triumph of Genius tells the incredible story of the reclusive genius who, as a teen, invented the plastic polarizer, which is still used almost a century later in countless popular applications including our sunglasses and LCD screens. Land went on to pioneer a revolutionary system of photography that provided instant gratification. Like making a Xerox, or using a Kleenex, everyone knows what it means to take a Polaroid. Along the way Land made critical contributions to top-secret U.S. military intelligence efforts during World War II and the Cold War in the service of seven American presidents.

A Triumph of Genius chronicles, in an unprecedented inside account, Polaroid’s landmark legal battle with Kodak, the outcome of which continues to influence the protection of technological innovation well into the 21st century.

A TRIUMPH OF GENIUS